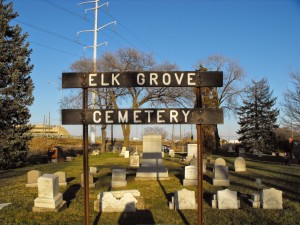 Husband and I had just realized we missed a turn on the way back to our hotel when we saw Elk Grove Cemetery.

This little cemetery appears to have been randomly dropped near a busy intersection of multi-lane roads and an expressway off-ramp.

So imagine our surprise when we read about the Revolutionary War veterans buried in this oddly situated cemetery in a northwestern suburb of Chicago. 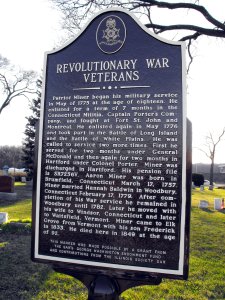 Although it was dusk and the setting sun made it challenging, we took a few pictures. Then we headed to the hotel to change for dinner.

While we ate we commiserated about how the bright sun blurred the engravings in photos of white marble headstones.

Husband commented that because of this he had opted not to photograph a few headstones on his way out of the cemetery. The names and dates simply wouldn’t have been legible.

The next morning, Husband looked up Elk Grove Cemetery on Find A Grave. He noticed no one had taken pictures of the headstones he had mentioned the night before.

So before we headed home, we returned to this little cemetery by the expressway.

And in the early morning light, we memorialized those forgotten few.