Ah, wedded bliss. Not always the case in my family tree:

My great-grandmother divorced her first husband and gave away their three children. A few years later Esther Ingeborg CLARIN married Charles Fredrick OTTO in Chicago, Cook, Illinois. I located their 10 Sept 1918  marriage certificate on familysearch.org where Esther’s name was indexed as Esther Kerien Wamgel rather than Esther (Klarin) Mangels. But then even Esther herself had a little trouble with her name. She presented herself as Miss rather than Mrs.:

Augusta Charles Hermann MANGELS, one of the children abandoned by Esther and her first husband, was adopted and became known as Carl NICHOLS. Carl married Lila 11 Sept 1941. They were married until Carl’s death in 1993. That’s one of the feel-goods in an otherwise ugly story.

Carl’s grandparents (my 2nd great-grandparents) Herman Friedrich Carl MANGELS and Maria BUKMAKOWSKI were married in Chicago, Cook, Illinois on the 18th of September 1886: 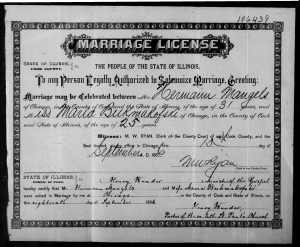 My 3rd great-grandparents Nicolas SCHMITT and Marie Anne GURY are among my favorite ancestors. They were married 26 Sep 1837 in Hellimer, Moselle, Lorraine, France: 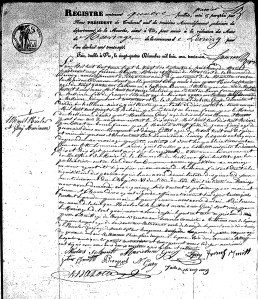 Their marriage survived 13 children, immigration from France to Cincinnati, Hamilton, Ohio, and many hardships. Nicolas died in 1876. Marie Anne’s death date has not yet been proven, but the couple is believed to be buried together. Cincinnati’s courthouses (and the records therein) burned three times.

Are my ancestors in your family tree too?

If so, please contact me at where2look4ancestors [at] gmail [dot] com