While doing 19th century research at the local university, I got caught up in the lives of three couples. Do any of the people that appear below also appear in your family tree?

The following stories appeared on the front page of the January 5th, 1894 issue of the Chicago Daily News:

(story #1) Smoked in the Court Room George Kemp is a happy-go-lucky-sort of an individual. This morning he sat in the police court-room at the East Chicago avenue station and despite the fact that it is against the rules George blew thick rings of cigar smoke into the atmosphere. When Kemp’s case was called he lazily made his way to the dock, carrying his smoldering cheroot with him.

In the witness-stand stood Miss Betty Heinz of 58 Howe street. She hesitatingly said that Kemp ought to marry her, but as he had refused to do so she had caused his arrest. “I want a continuance, yer honor,” drawled Kemp. “Let the case go over to Jan. 9,” said the court.

“Yes, that’s long enough,” observed Kemp, as he blew a cloud of smoke in the direction of the court and slowly faded away in a halo of smoky ringlets.”

OMG – what a cad! I hope dear Miss Heinz found happiness with a more caring man. There is a possibility in the records a few years later: https://familysearch.org/pal:/MM9.1.1/N7WC-LNR

MARK-Anna Veronica Mark has filed a bill in the Circuit court asking for a divorce from her husband, Frederick, who, she says, is a sometimes policeman. They were married October 22, 1889, and have two children. The complainant says that for two years the defendant has been an habitual drunkard, getting drunk on the average of ten times each month.

In November 1890, she says he came home in the early hours of the morning much intoxicated and pounded on the door. She got out of bed and let him in and he knocked her down. In October, 1891, she claims he drove her and her little child out of doors in the night and she had to seek refuge with neighbors. In July, 1892, she alleges he drew his revolver and threatened her. Mrs. Mark says her husband is a strong, healthy man, and when sober is employed on the police force.

According to the 1900 census Mrs. Mark did not succeed in divorcing her abusive husband in 1894: 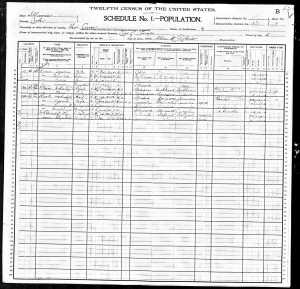 In 1910 however, Annie Veronica (nee McDonald) and her daughters are settled in a new home with a different head-of-household.  Hopefully, this blended family lived happily ever after: 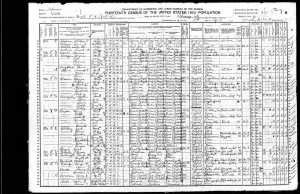 1910 Census Annie and her daughters

(story #3) Cause of Wife’s Suicide – Mary Waters Took Poison Rather than Be Separated from her Young Husband – Sad End of a World’s-Fair Romance – The Couple were Married but Three Months Ago – Pinched by Hard Times;

“You have made me all the trouble you could, but I’ll put an end to it now”, declared pretty Mary Waters yesterday morning to her foster parents, and that is how it came about that young William O. Waters is a widower to-day.

It was the tragic termination of one more World’s Fair romance. A young wife of not quite three months, Mrs. Mary Waters felt the depression of the hard times so much that to put an end to what seemed to her insurmountable difficulties she ended her life. And a peculiar circumstance of the affair is that she served notice of her intentions on her nearest relatives and still was not prevented. The number 5520 on Ingleside avenue is a neat two-story frame house that has for four years sheltered old Mr. and Mrs. Thomas Cunningham. Their only companion was pretty Mary Sullivan, who at the age of 7 years was taken from a convent and cared for by Mr. and Mrs. Cunningham. They did not adopt the child, but she lived with them as their own.

Last summer Mary, in company with a few acquaintances, visited Col. Cody’s wild-west show. Among all the attractions the chief one to Mary was a young waiter named William O. Waters, who paid her some attentions. The acquaintance thus begun was kept up by the young people, and the romance of a summer’s flirtation ended in Father Glennon’s marrying William and Mary Oct. 13.

William had bad luck. When Buffalo Bill’s outfit left the young husband was out of a job and the work he found at the horticultural building at the Fair lasted only a short time. Then the real hard times came on and William had no work. He, with his young wife, went to live at 5520 Ingleside with the old folks. Then Mary’s troubles began in earnest. She was made welcome, but William wasn’t and many a hint was thrown out that he was not a necessary feature at the family board. But Mary said if William went she would go, and so they both staid [sic]. But of late the insinuations became more pointed, until finally the old man came out flat-footed and said William must go. They would give Mary a home for the winter, but William must go out and do for himself and if he wanted to come back in the spring and get his wife, why, all right. This made Mary feel very badly and yesterday morning there was a very unpleasant scene.

Then said Mary: “You have made me all the trouble you could, but I’ll put an end to it now.”

She had 20 cents and with this sum she purchased some “rough-on-rats”. Returning to the house she announced her intention of ending her life. Mr. Cunningham was troubled. Not, it seems, by the fear that she would commit suicide, but that she might do him some harm, so with the young husband he went to the Hyde Park police station to consult the police. He was advised to return home and see if his foster daughter had not given over her gloomy intentions. When the two men returned Mary met them at the gate and was in apparent good humor. But soon she was taken violently ill and then her relatives began to fear that the threat she had made about ending her life would be carried out. A doctor was sent for and so was a priest. The former could do no good and the latter administered was consolation he could. Mary died at midnight.

“We lived happily during the short time we were married”, said young William, who is but 21, this morning. “But the old folks made things unpleasant. I didn’t think Mary meant what she said when she talked of ending her life.”

“She was a good child,” said the old foster-mother, “and was always welcome to a home with us. We told her husband he must take care of himself and this made her feel bad. She had poor health and was subject to spells of faintness from heart trouble and I do not think she was in her right mind when she killed herself.”

The old couple came to this city from Amboy, Ill., four years ago. They own some property in that town and some real estate in Chicago.

If anyone named in the stories above resides in your family tree, please let me know what became of the survivors. I’m sure other readers would also be interested in learning how these stories really ended.