I’ll bet you’ve been wondering how my genealogy filing project is coming along. 🙂

You may remember that in Fun with Genealogy Files Part 2, I shared my desire to create virtual place holders for each of my direct line ancestors that matched my paper file place holders. I also shared the disappointment I felt when I saw the computer files I had in place:

Oh no, it’s another project!

I needed to close the gap between two opposing realities:

In Dropbox, my family tree folders are divided into People, Places, and Things. The People folders contain documents related to my direct line ancestors (and their collateral lines) and should be labeled accordingly. As you can see in the photo above, some of these things are not like the others.

So my next step was to clean out folders that didn’t belong:

And then I created ONE folder for each of the direct line surnames in my family tree: 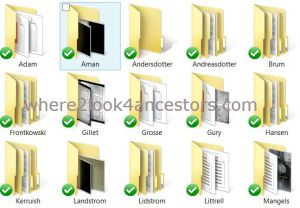 Some things had been filed (incorrectly) for safe-keeping until I could return to them. Like the “FHC Film” folders in the 1st photo above. But as I mentioned in Fun with Genealogy Files Part 2, when I work on my tree I’m primarily thinking about people. Since there’s no one in my tree named FHC, I tackled those folders next:

My Places folders are getting a face lift too!

At this point I knew I needed to start tackling individual ancestors’ folders. But how? There are so many! I felt overwhelmed. I didn’t think I could ever get through them all and I was tempted to throw in the towel.

Instead I took a few days off and pondered. Should I start at the As and work toward the Zs? Boring. Focus on my maternal line? What about my paternal ancestors? Begin with my parents and work backward? That could take forever! Before long my head was spinning. I needed a plan that would keep my interest all the way through those file folders. Keeping me interested would required a bit of skipping around.

Then it came to me – I would use my 2015 blog’s editorial calendar as my plan of attack. I could combine writing about my ancestors with organizing their files. It’s the perfect systematic yet skipping-around-enough-to-keep-my-interest organizing technique.

And I thought of it just in time – whew! Because as luck would have it, one of my direct line ancestors was born January 1st.

– the rest was a plethora of disorganization. Ugh.

Since I don’t have an unlimited amount of time for organizing my genealogy files each week, I decided that a 10% reduction in clutter was an acceptable amount to tackle. It gave me a feeling of accomplishment without taking over an entire day.

The contents of my Tolf folder needed to be decreased by 24 items. I chose:

There is lots more to do, but having a plan really helped. Plus, did you notice? I decreased one item above and beyond my target. Yay me!