My 3rd great-grandfather was born in Maryland 25 Feb 1830 to Rebecca Margaret (nee Ridenour) and her husband Mathew Clark.

Morgan followed in his father’s footsteps (no pun intended) and made his living as a shoemaker. Both father and son were politically active according to newspaper accounts of the time. But while Mathew was married to one woman his entire adult life, Morgan was widowed early on.

Susan Hammer Shank married Morgan Clark 15 Mar 1854 in Washington County Maryland and gave birth to at least 11 children before her death. She died between 02 September 1877 when her son Harry Orville Clark was born and 10 June 1880 when the federal census was taken:

In the census forty-eight year old widowed Morgan lives with his sister Henrietta and her husband Thomas Downey. Remember those 11-ish children I mentioned? After Susan’s death most of the children were farmed out to neighbors and friends in the area surrounding Funkstown, Washington County, Maryland. Several of them, some surprisingly young, worked as farm laborers.

And while these things make me tip my head and say hmm, they aren’t the only reasons Morgan intrigues me.

When the Civil War began in April of 1861, Morgan Henry Clark was 31 years old. The Battle of Antietam practically took place in his backyard. 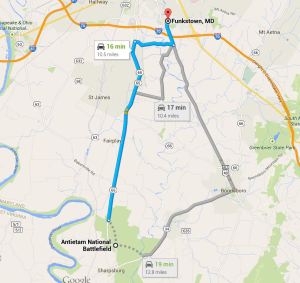 Yet I have found no record of Morgan participating in any Civil War-related activities.

One line from the Battle of Antietam page on Wikipedia really caught my eye. “Attacks and counterattacks swept across Miller’s cornfield and fighting swirled around the Dunker Church.”

Dunkers appear elsewhere in my family tree and they too are pretty darn close to Morgan.

Were Morgan’s parents members of the Dunker church at one time? Would they have raised Morgan to believe (as Dunkers did) in non-resistance? This might explain Morgan’s absence from Civil War records despite his proximity to the fighting.

If my 3rd great-grandfather was raised in the Dunker church, he made a change somewhere along the way. Because despite what is written in his obituary, Morgan Henry Clark is buried in a Lutheran church’s cemetery in Funkstown, Washington, Maryland.

For cousins trying to place Morgan and me in our family tree:

Interested in collaborating on Clark/e family history? I can be reached at where2look4ancestors [at] gmail [dot] com.

My 2015 goal for Morgan is to determine whether he was ever a member of the Dunker church.

My 2015 organizational goal for Morgan is to bring all of his documentation from out-of-date to up-to-date on Ancestry, Dropbox, Family Tree Maker, and in his paper files.