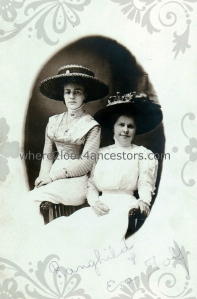 As a matter of fact, Pearl lived with Ranghild and her family in the 1910 census. Then in 1913 Pearl married Algernon Chastaine Porter. Their marriage was short-lived.

A few months before Pearl’s wedding, Eva had married Carl Clifford Hedrick. Together they had three daughters; Elva Marie, Leona Louise and Louise Virginia. At the time of Carl’s death in 1970, the couple had six grandchildren and four great-grandchildren.

Ranghild never married, but she was a most welcome participant in family gatherings throughout her long life.

I wish I knew which event prompted this photograph, it’s one of my favorites!

2 thoughts on “Oh Those Beautiful Hats!”