I received Marilyn Yalom‘s The American Resting Place as a gift some months ago. If you haven’t yet read this book, I encourage you to do so. Genealogists and historians alike will find many items of interest among the 320 pages of text.

Pages 184 and 185 in particular piqued my interest while preparing for our recent trip to Chicago:

“Mount Olive Scandinavian Cemetery…Predominantly Lutheran and Swedish-speaking, Mount Olive’s early inhabitants bear such names as Hansen, Olson, Thompson, Johnson, Bensen, Rasmussen, and Christensen. Their markers are sturdy and somber – granite slabs and draped obelisks, occasionally adorned with fern or ivy motifs. Many of them are now askew, leaning like the Tower of Pisa or already toppled from their pedestals (plate 43). Few descendants return to tidy up the graves of their ancestors, since so many early Chicagoans of Scandinavian descent have moved away….

The Hispanic section, with its decorated tombstones and exuberant floral displays, contrasts with the understated, now untended, Scandinavian markers…”

A Scandinavian myself, of course I felt duty-bound to visit Mount Olive. I had never been to this cemetery before and was curious about it.

There was a funeral in progress when we arrived, so Husband and I quickly moved to the opposite corner of the cemetery. We weren’t able to take that “location” photo at the gate before we started, so we photographed our Find A Grave photo requests list.

Because of the funeral and the way the cemetery was laid out, all hope of filling those photo requests quickly diminished. Instead we chose a section that seemed manageable and split up. Husband started at one end, I started at the other, and we worked our way toward the center taking pictures as we went. In all I ended up with 385 images.

But they weren’t all single headstone photos.

This cemetery was different. The headstones weren’t really in rows. They were in…well…clumps.

Marilyn Yalom’s description was accurate. Many of the headstones in the section we photographed are twisted from their bases. Others lean at awkward angles. Some, like the one below, are laying face down on the ground.

Others are being swallowed by the earth. 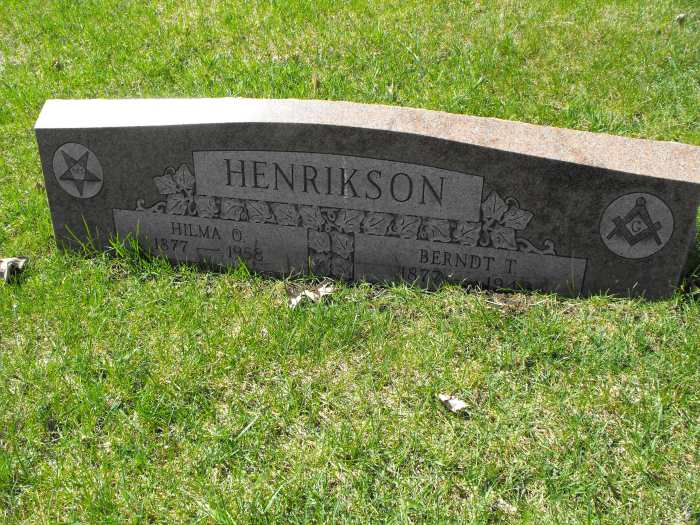 This isn’t to say there aren’t some lovely monuments at Mount Olive. There are. But the quantity of untended, bent and broken headstones overwhelm the more, shall we say, monumental among them. At least in the Scandinavian section.

Marilyn’s description of the Hispanic sections of Mount Olive was also accurate. Beautiful black marble headstones surrounded by an amazing riot of colorful flowers and balloons and gifts left for loved ones who have passed away.

The contrast was a bit disconcerting.

We photographed all the headstones in section E and then it was time to go to dinner. It took a while to shake off what we had seen.

Thank goodness we still had a few cemeteries to visit. Next up? St. Adalbert in Niles.