So often we look for the leaves on our family tree on the obituary page of newspapers, but neglect to peruse the other pages in these publications.

Even in big cities, neighborhood activities were frequently reported in the newspaper. These brevities give us a glimpse of the day-to-day happenings in our ancestors’ lives.

Could one of your ancestors be mentioned in “The City in Brief” column? The following appeared on page one of the August 24, 1882 evening edition of the Chicago Daily News: 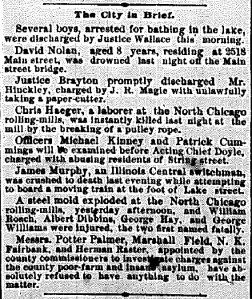 “The City in Brief

Several boys, arrested for bathing in the lake, were discharged by Justice Wallace this morning.

Chris Haeger, a laborer at the North Chicago rolling-mills, was instantly killed last night at the mill by the breaking of a pulley rope.

Officers Michael Kinney and Patrick Cummings will be examined before Acting Chief Doyle, charged with abusing residents of String street.

James Murphy, an Illinois Central switchman, was crushed to death last evening while attempting to board a moving train at the foot of Lake street.

Messrs. Potter Palmer, Marshall Field, N.K. Fairbank, and Herman Raster, appointed by the county commissioners to investigate charges against the county poor-farm and insane asylum, have absolutely refused to have anything to do with the matter.”

2 thoughts on “Is Your Ancestor in this Newspaper Column?”