Fatal Plunge of an Unknown Man from Lake Street Bridge. 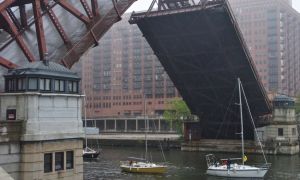 At 10 o’clock this morning a large crowd was collected on the northeast corner of the Lake street bridge, gazing excitedly over the railing at the water beneath the bridge. Many were swarming down the rickety ladder to the dock, where a few men were eagerly tugging at the chains and padlocks of a couple of slimy boats, half filled with water which were fastened to the piles.

A moment before a dark-complexioned man had been seen to leap over the railing which guards the bridge and fall with a splash into the muddy water below. The cry of “man drowning” was raised and everybody rushed to the rescue.

About half-way between the bridge pier and the dock a swarthy face and two hands were for a moment visible above the surface of the opaque fluid. A man with his head thrown a little back was apparently floating.

“Swim!” shouted some one from the bridge. The man seemed to hear the cry, but instead of moving his arms he deliberately opened his mouth, and, turning over, plunged his head under water and sunk.

A moment later his head arose again a few feet nearer the dock. A pole was shoved out to him, but again he turned, and, pushing his face under the water, once more disappeared.

By this time a boat had been unfastened by Bridgeman Paine and had nearly reached the spot where the drowning man had gone down; but a tug came rushing along under the bridge and when the body next appeared it had been carried several feet away. The next attempt was successful and the limp and dripping form was dragged into the boat, but no signs of life remained. The patrol was called and the body taken to the Cook county morgue.

There was nothing found by which the man could be identified, except a peddler’s badge bearing the number 314. He was of dark complexion, apparently an Italian, about 28 years old, and would weigh possibly 130 pounds.

The last license issued under the number 314, as learned at the city clerk’s office, was to Philip Runner, 129 DeKoven street.”

Information about the Lake Street Bridge can be found here: http://chicagoloopbridges.com/bridges12/SB12/LAKE12-1.html This was the source of the photo above. The article above was transcribed from the front page of the June 20, 1894 issue of the Chicago Daily News. My transcription is exactly as it appeared in the Chicago Daily News with the exception of quotation marks at the beginning and end. Abbreviations, capitalizations and references to people, places and things are indicative of the era in which the information was originally published.