Which [in English] reads, “Christophe GROS legitimate son of age [of majority] of the late Nicolas GROS, plowman in Wirming when he was living, and of the late Catherine BRUN…”

This is how I first learned the name of my 6th great-grandmother. I’d like to know more about the late Catherine Brun.

I thought it might be easiest to start with her death and work my way back. Since there was a reference to Catherine’s husband having lived in Wirming [now Virming], I went to my favorite French web site to look for a record of her death there. No luck, there are no records online here for Virming or Wirming.

Hmm. Another look at the marriage record.

The marriage banns had been posted on three consecutive Sundays in the parish church of Léning and in the church of Wirming. Could the Léning records provide information about Catherine’s death?

I’m in luck, there are two parish books that cover the time period prior to 1774:

Then a funny thing happened.

Virming and Obrick, previously unmentioned, are now listed among the town names. Neither has records online – yet – but there is hope.

In the meantime, I may have to look for Catherine Brun the old fashioned way – at my local Family History Center: 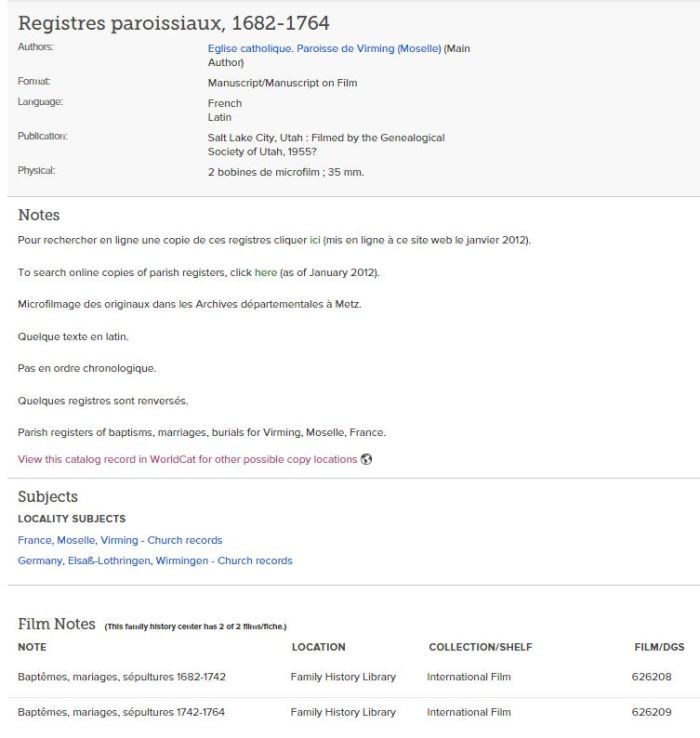